Cambodia casino workers can pat themselves on the back as their two-day strike ended in victory form them. On the 11th of January, the largest casino company in Cambodia, NagaWorld, decided to relent and raise wages for casino workers. The workers’ union leader was also reinstated as per the demands.

The casino organisation that is owned by Hong Kong-based company, NagaCorp, is the operator of the biggest casino in Cambodia, Phnom Pehn. In recent years Chinese-owned gambling facilities have been booming. These casinos target Chinese tourists that come from the mainland, in China, gambling is illegal. The Cambodia casino workers took to the streets in the previous week to protest the working conditions and low wages that the casino was offering.

This was not the first time that the Cambodian casino workers have asked for a raise in wages. In September 2019, the employees made this request, and the casino management responded by suspending the president of the workers’ union, Chhim Sithar. 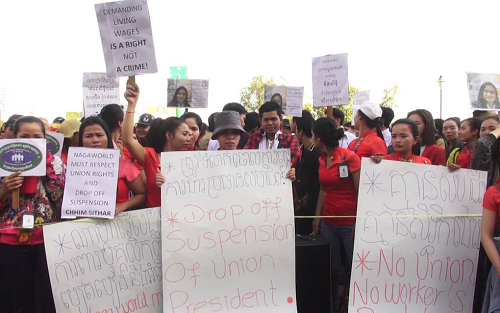 On the 8th of January 2020, the casino operator went to court to have the planned action strike declared illegal. This led to 23 civil society entities signed a statement that encouraged the Cambodian authorities to respect labour rights.

More than a thousand Cambodia casino workers ignored the court order and went on strike, with protests outside the hotel. Some non-union members also walked out of the casino to show solidarity with those striking.

Some of the signage that the workers were holding up targeted discrimination of unions, the exploitation of workers and the fact that seeking living wages should not be considered a crime.

On Friday, 10 January 2020, NagaWorld representatives met with government officials for negotiations with the striking workers. During the talks, the management of the casino decided to raise wagers and reinstate Chhim Sithar. The strike then ended peacefully, and the workers returned to work on the 11th of January 2020.