Online Casinos UK » Can You Tell When a Slot Machine is About to Hit?

Can You Tell When a Slot Machine is About to Hit?

Knowing the probabilities is the key to predicting when a slot machine is about to hit. It is most vital to understand the concept of a random, independent event.

Every wager you place in an online gambling game relates to a separate, random event. Essentially, that means what happened in the previous event doesn’t influence the likelihood of what will happen next. Read this guide to find out if you can tell when a slot machine is about to hit or not. 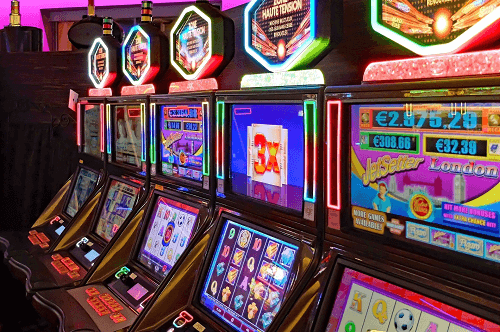 Playing roulette, for instance, has 38 possible outcomes because there are 38 numbers on the wheel. The probability of winning on a single number is 1/38.

If the ball lands on that number three times in a row, what is the probability that it will land there again on the next spin? It will still be 1 in 38 chances. It does not matter which way the wheel spun in the past because it did not alter the number of ways to win. You experience an independent event each time you spin the reels of a slot machine.

It’s not uncommon for slot machines to run hot or cold. Random events have that nature. Wins and losses may occur sequentially. Variance causes it. Consider a machine whose slots probabilities are programmed to ensure a 30% hit rate.

On such a machine, about one in three spins will result in a win. As far as hot or cold games are concerned, they only become apparent in retrospect or after.

It is not possible to predict anything from them. It’s also worth noting that slot machines aren’t programmed to revert to a winning streak after an initial loss, and they’re also not programmed to become profitable again following a long period of non-winning. Random number generators in the machine determine the results. When it comes to predicting when slot machines will payout, there are no hot and cold cycles.

The Zig-Zag Theory in Slot Machines

many people believe that zig-zag strategies require you to find a machine with a tendency to show winning symbols whenever they are triggered. As long as they are all there, they will form a zig-zag, then it means payout. The simplicity of this is appealing. However, the next spin will not be affected.

Casino game developers use Random number generators (RNGs) to determine outcomes in modern slot machines. Symbols are only for aesthetic purposes. There is a numerical value associated with every slot machine combination.

The program and numbers are generated at a rate of thousands per second. Pulling the lever or pressing the spin button shows the symbols on the screen, and the machine pays according to the number it landed on.

It’s a mistake to think the number cycle predicts something. There’s no automatic countdown by a computer program per second, per minute, or anything like that. the RNG generates a thousand numbers per second. Timing is impossible.

What is the best way to tell when a slot machine is about to hit? A gambler’s biggest mistake is to believe this is possible. Simply put, you can’t. It is only wishful thinking to arrive at any other conclusion.

You can pick any slot machine you like, put some money in and hope for the best. The odds are in your favour. However, it won’t be because of your knowledge of when the game was due. The outcome will just come down to dumb luck.