A new Neon City Slot game has been released by casino software creator, Wazdan, and players are promised as a top-tier gaming experience. According to Wazdan, the fruity slot machine game is not the traditional format that slot players are used to. Players will be dazzled by neon symbols, high-level bonus rewards as well as new quality features. Slot players can access this new game on all platforms offered by Wazdan partners.

The Neon city slot has some new features that players won’t be familiar with that will enhance their gameplay. For instance, the introduction of the Mega Spins feature has accumulating and decreasing symbols. Every time the game shows an accumulating symbol, the bonus game meter will increase. Alternatively, when a decreasing symbol appears, the number on the bonus meter will go down. The Mega Spins feature will appear when the bonus meter reaches 8. Players will get a bonus of eight spins, and all their wins will be multiplied eight times. 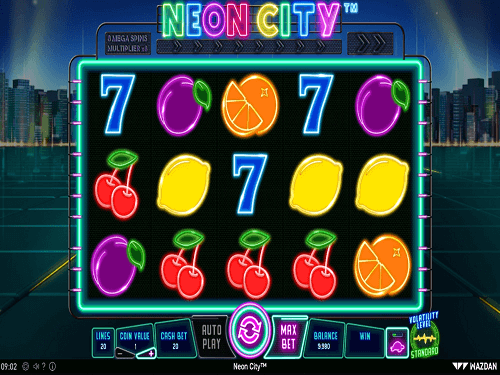 Andrzej Hyla, the head of sales at Wazdan, told the media that they are excited to give players another slot machine game. She further added that players would see that their gameplay will be enhanced with this fruity-neon-themed slot machine game. Hyla also told the media that Wazdan has had a good year in 2019 and there plenty more news that is going to come before the year ends.

Neon City is not the only slot machine game that Wazdan released this year. Just a few days ago, the gambling software developer announced that they were releasing a slot game called Butterfly lovers. This slot machine game’s central theme is the forbidden romantic relationship between Zhu Yingtai and Liang Shanbo from the Ancient Chinese tale. The slot game has many extra features, including Ultra Life, Fast Mode as well as a Double Screen.